Warning: Use of undefined constant FLYWHEEL_PLUGIN_DIR - assumed 'FLYWHEEL_PLUGIN_DIR' (this will throw an Error in a future version of PHP) in /home/316961.cloudwaysapps.com/kzgkgkngvf/public_html/.fw-config.php on line 11
 About the Future Film Festival Graphic Design Workshop and Competition The Future Film Festival Design Workshop and Competition (a bit of a mouthful, I know) is a project conceived and run by designer Piccia Neri for the BFI Future Film Festival. It is based on a series of practical workshops for design students, with the final aim of creating a marketing campaign to advertise and promote the festival.

What is the BFI Future Film Festival?

The BFI Future Film Festival is a yearly event conceived, designed and run by Piccia Neri for the Future Film Institute and held at the BFI (British Film Institute) on London’s Southbank every February since 2008: a film weekend packed with screenings, workshops and masterclasses, an active festival rather than a passive one, where kids go to learn how to get involved in the world of film. The Festival, besides providing access to industry talent and expertise and screening great feature films, showcases some of the best short films produced by talented young filmmakers. It’s a fantastic event, very inclusive, where you learn from the best in the film industry while having fun. And it’s about every single aspect of filmmaking, blogging included – as well as how to promote films and work on a campaign, thanks to this workshop. A bit more on the BFI Future Film here.

From the first festival in 2008 to 2011, the main image for the FFF was always designed by the BFI graphic design studio, which I (Piccia Neri!) used to run at the time, or by myself (see artwork here). When I was asked again to design the campaign for 2012, I felt that the time had come to let the young design for the young, and I put forward the proposal for this workshop: it’s much more suited to the ethos of the FFF itself, as well as fulfilling the BFI’s own mission to champion new UK filmmakers. Noel Goodwin and the rest of the BFI thought it was a great idea, so we got started straight away. And although I will forever be young at heart (if nothing else) – it is only right that young people design to an audience of their peers. Not only that, but it is my dream and life mission to bridge the gap between graphic designers and filmmakers: I hope that the next generation’s Alfred Hitchcock and Otto Preminger can meet their Saul Bass in the darkest depths of the BFI theatres.

So this is how it works:

The workshops usually take place in late October in London at BFI Southbank, over the course of about 3 weeks. The first session is the only one that is delivered more in a lecture format, as I present the history of film poster design and then move on to look at film festival poster design as a genre (which is a different thing!). Even during the first session, however, the students are always encouraged to get a conversation started and express their opinion on the posters that we look at. This is a great starting point for considerations on what makes a film poster great, and the correlation between great films and great posters (if any…).

The second session is mostly dedicated to finding out more about the BFI in general and the BFI Future Film Festival in particular: we get a visit from Noel Goodwin, who runs the festival and the Future Film Institute at the BFI, and from a marketing manager or designer from the BFI team, to talk about BFI brand values and guidelines and to deliver the creative brief for the festival this year. Through a live project like this, the students can learn about all the quirks and restrictions of a living brand, and the direction set by a brief (usually quite open for this festival, but there are always caveats). This is a very important part of the process, perhaps the most important one.

From the third session, the spotlight is on the students: each participant has to take centre stage and discuss their ideas and designs with the rest of the group. These are open sessions, with everyone feeding back and giving suggestions on how to best carry the idea forward. It is usually great fun and so interesting to see how differently each mind reacts to the same brief. Ideas are then perfected and then presented again to the group– then a rehearsal session before the Big Day of the final presentation to the panel of BFI judges. These are all the stakeholders in the delivery of the FFF: managers and directors from the education, marketing and events department who are responsible for the promotion, organisation and delivery of the festival. This is an incredibly useful real-life experience: the students have to deliver their pitch just like any design agency would and the managers take their presentations just as seriously. After this, we deliberate. The red tape at the BFI is considerable, so it takes a while before a decision is reached – and sometimes more than one single idea can be looked at. I have always have to remind the students to not hold their breath. They would most definitely run out of it.

When a decision is finally made, we let the lucky student know and meet up with her/him again at the BFI, where we work out the details of when they will do their internship in the BFI studio to finish off their concept, adapting it to a number of platforms, both online and off. This is the only internship currently available at the BFI so it’s an extremely precious one. It’s the main ‘prize’ for the workshop – but, as you will see, everybody is a winner in this competition.

What if your concept doesn’t get chosen, but it was really, really good? 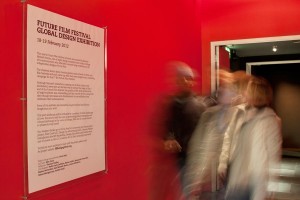 Visitors in and out the FFF Design Workshop exhibition at BFI Southbank, 17-18 Feb 2012.

That’s the best part. Every single student will take part in an exhibition of all the designs during the Future Film Festival. Starting from 2015, the students will also hold their own session at the festival, running a clinic on how they designed their poster. This is a fantastic opportunity for young designers and filmmakers to meet, connect and hopefully lay the foundations for a future collaboration. So even after the ‘winner’ of the workshop has been announced, you still develop and grow your concept in preparation for the exhibition at the Future Film Festival, where you will get to showcase it and talk about it with festival-goers – quite possibly, your future clients: the filmmakers of the very near future.

Please note that past workshops up to 2014 have their own home here.The pilot workshop took place at the BFI with London College of Communication 2nd year students (Design for Advertising, tutor: Sian Cook) in November 2011, producing the campaign for the 2012 Festival. The winning student, Sam Mensah, won a Bronze award from the Film Festival Poster Awards 2012. Well done Sam! His presentation is archived in the old website.

The main image for 2013 was provided by student Michael Langdon, also from the London College of Communication. You can have a look at Michael’s section on the old project website to see how he created and developed his concept.

And again, the main image for 2014 was by another London College of Communication student, Dhiren Patel.